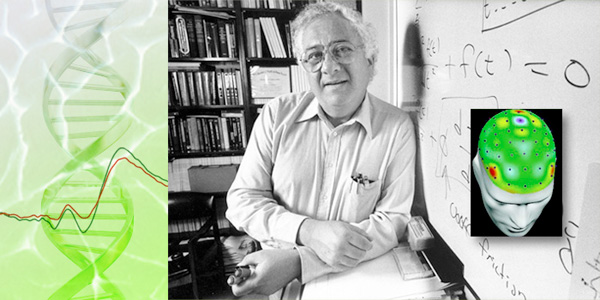 In our laboratory we place a great deal of emphasis on the dynamic properties of oscillations in the human brain to increase our knowledge of information processing. These electroencephalographic (EEG) oscillations have a superb time resolution, and are especially effective for studying the temporal interactions of brain processes involved in neural networks.

We are studying the simultaneous occurrence of specific oscillations such as delta (1-4 Hz), theta (4-8 Hz), alpha (8-13 Hz), beta (13-28 Hz), and gamma (above 28 Hz) in the human brain to understand information processing and human cognition. These studies are carried out in normal individuals, alcohol abusers and individuals at risk. These oscillations are known to carry information, which require the coupling of digital methods of signal analysis and of brain imaging. Finally, it should be noted that because these oscillations are highly heritable, we are attempting to identify genes responsible for the production of those fundamental brain oscillations.

Our research can be divided into three major parts:

Alcoholism and the promise of new research

Alcoholism has troubled men and women for thousands of years. For too long, people have thought of alcoholism as a sign of "personal weakness"; they blamed alcoholics for their illness and offered them no real hope or relief. Due to tremendous progress in scientific research, investigators can now study biological influences on alcoholism, some forms of which are most likely inborn and passed from generation to generation.

Facts about the genetics of alcoholism

Studies of adopted children strongly indicate that some people have an inborn vulnerability which increases their chances of developing alcoholism.

Fact: Children who are born to parents with alcohol problems but are adopted and raised by non-alcoholics still run a very high risk of developing alcoholism.

Fact: Children who are born to non-alcoholic parents but are adopted and raised by individuals with alcohol problems are not at high risk.

There is much which can be done both by those at high risk for genetic illnesses, including alcoholics and their relatives, as well as by medical researchers!