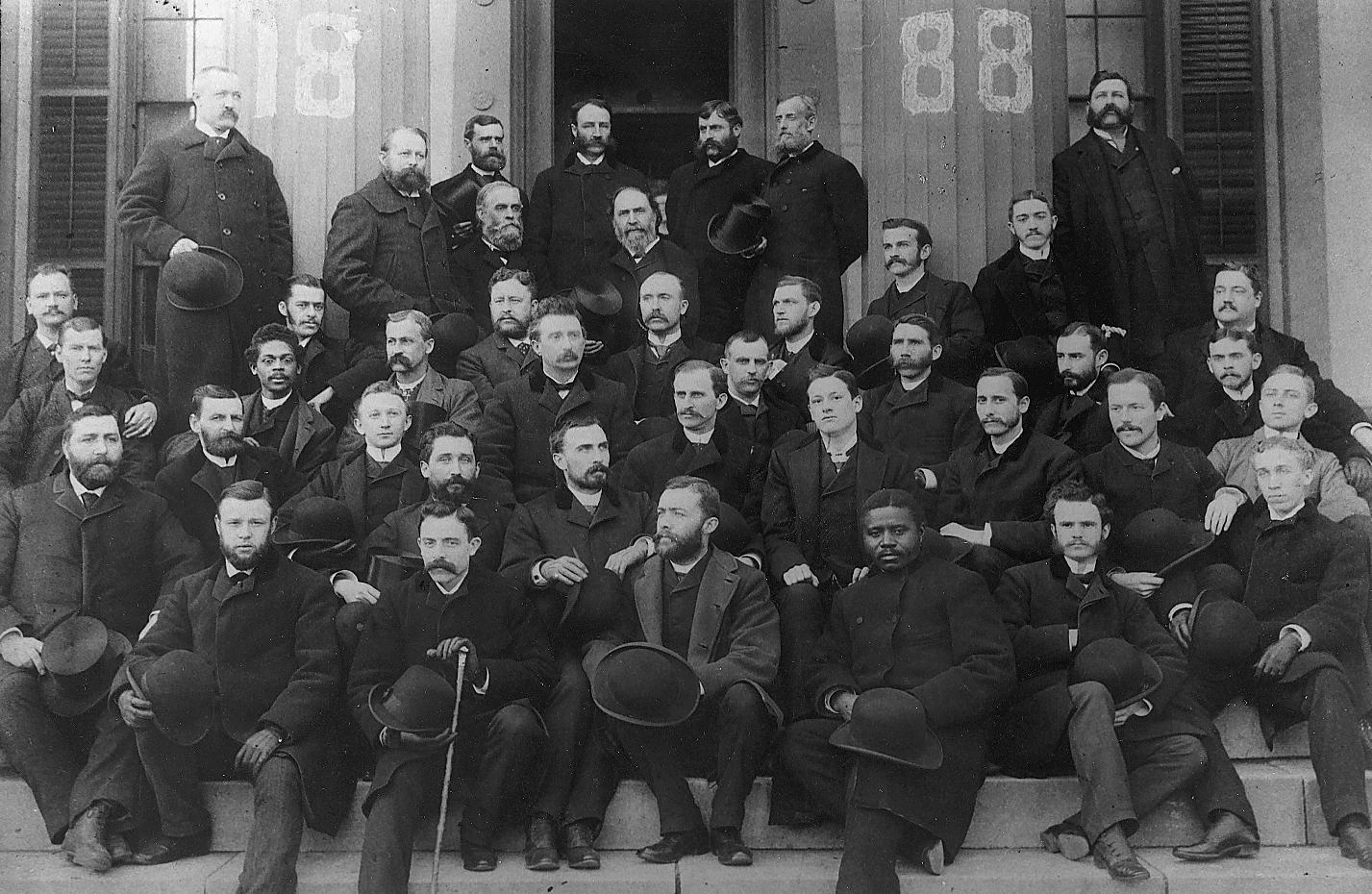 Downstate Health Sciences University, had its beginnings as a small charitable medical service set up in 1856 by a group of German physicians. This free dispensary, organized to treat indigent Germans living in Brooklyn, was staffed by five physicians.

The original intention of the founders of the dispensary was to build a large hospital to care for the German population of Brooklyn. But changing population trends, which brought a largely Irish patient load to the dispensary, necessitated a revision to this plan. On October 27, 1857, physicians from the German General Dispensary, then located at 145 Court Street, and several other prominent Brooklynites, resolved to organize a charitable institution in the City of Brooklyn, to be called St. John's Hospital. From November 7, until December 23 of that year, the dispensary was called The St. John's Hospital; on December 23, the name of the hospital was changed to The Long Island Hospital and Medical College. It was on this date that a medical college with a hospital was first projected.

Dr. Louis Bauer and Dr. John Bryne, the prime movers in the establishment of the medical college, were trained in Europe, where it was customary for medical schools to be associated with hospitals. The two physicians naturally wanted to adopt this system to prepare the future physicians of Brooklyn, then an independent city and the third largest in the United States. A bill to incorporate the Long Island College Hospital of the City of Brooklyn was introduced in the State Legislature January 20, 1858, and was passed March 6. The hospital's charter empowered 25 regents to operate a hospital and to confer degrees on candidates twenty-one years of age, or older, who had passed three years of preceptorship under a practicing physician and had completed two courses of lectures at the hospital.

Almost immediately after the charter was signed, the Perry Mansion, located in Brooklyn Heights, was purchased to house the new medical complex. The old dispensary on Court Street was vacated, and by mid-June, 1858, the hospital was admitting patients. The official inauguration of the Long Island College Hospital took place June 3, and the complex was opened for the inspection of the profession and the public generally on November 15.

Financial difficulties beset the new institution almost immediately, slowing down efforts to open the medical school. The hospital itself was forced to close in late September, 1859. Meanwhile, several outstanding medical men were secured to fill the professorships at the college, and on March 29, 1860, the institution reopened its doors following financial arrangements underwriting the expense of the collegiate department and settling various liens. The following day, March 30, 1860, the instruction of students began. The first teaching faculty was a distinguished one. Most eminent of all was Austin Flint, Sr., M.D., professor of practical medicine and pathology, who had been a professor of medicine at Rush Medical College in Chicago.

A medical student's training in 1860 consisted of three year preceptorship under the direction of a practicing physician and attendance at two courses of lectures of at least sixteen weeks each. The lectures that were given in year one were repeated in the year two, sometimes verbatim, so many students took their first  set of lectures at one school and their second at another. The first class had 57 students, as well as a number of graduates of other institutions. The first commencement took place July 24, 1860, with 21 students graduating.

In 1861, in anticipation of the medical needs of the Civil War, the curriculum included a one month course on military surgery, dissection, and clinical instruction on the wards. By 1869, major changes were introduced into the teaching curriculum. Daily class examinations were instituted to insure more exact knowledge, especially in the demonstrative and elementary branches. Another change, made in 1872, was the establishment of a reading and recitation term that began early in October and extended to the beginning of the regular term in March. This term included dissection and clinical instruction as well as reading and quizzes.

A new wing was added to the Pacific Street side of the Long Island College Hospital in March, 1869, and another wing was built on the Amity Street side in 1871. The latter was built chiefly for the accommodation of United States sailors, and brought the hospital's capacity to 200 beds. The total number of "indoor patients" treated in 1870 was 1,008, of whom 56 died in the hospital.

By 1879, the faculty of the Long Island College Hospital concluded that the system of teaching medicine in the United States was radically wrong. They debated the possibility of instituting a compulsory, full-graded, three year course of instruction, but abandoned the idea because of their fears that such a plan would result in the loss of many students, when the college was entirely dependent for its existence on students' fees. Certain changes were made, however, to improve the curriculum. The regular term was lengthened from sixteen weeks to five months, but the four month reading and recitation term remained optional. Thus, a total of eighteen month's instruction was available to any student electing two regular and two reading and recitation terms.

Between 1888 and 1897, the Long Island College Hospital grew rapidly. The Hoagland Laboratory building, built primarily for research in bacteriology, was constructed. At its opening, it was considered one of the best equipped buildings for research and medical training in the country.

In December, 1897, the Polhemus Memorial Clinic Building was completed. The new building, eight stories high, was erected on the southwest corner of Henry and Amity Streets.

By this time, State law required that a student take three courses of lectures in three different years. The system of having a regular term of five months and an optional reading term was retained. The entering class of 1897-1898 began the first four year graded course of instruction. The reading term was abolished, and the school year lasted seven months. In 1897, the student fees were raised to $185 and $190, from $125 in 1895. In the period from 1989 to 1909, the average number of student in the school was 310, and the average number in the graduating class was 62.

During the years immediately before and after World War I, many additional changes occurred at Long Island College Hospital. Admission to the school was opened to women; postgraduate teaching was instituted; a new wing increased the number of beds to 500; and affiliations were established with other Brooklyn hospitals.

In 1930, the college and hospital were separated from one another so that each would be under its own governing board. The college was conducting much of its clinical teaching in other hospitals throughout the borough, and it seemed preferable that it not be governed by the board of only one hospital. The college became the Long Island College of Medicine.

Other changes occurring during the 1930s included the construction of the Polak Memorial Laboratory, housing laboratories in bacteriology, histology, physiology, pathology, gynecology, and surgery. In 1935, 500 beds at Kings County Hospital were set aside in a college division for the clinical instruction of students.

In 1931 the school was rechartered as the Long Island College of Medicine, with affiliated hospitals throughout Brooklyn.

In the 1940s, full-time chiefs were appointed in all the clinical departments, training in psychiatry was offered a separate department, and Maimonides Hospital and the Veterans Administration Hospital in Fort Hamilton became affiliates, along with the Brooklyn, Brooklyn Jewish, Coney Island, Greenpoint, Kings County, Kingston Avenue, the Long Island College, and the Methodist Hospitals. In 1946, the third year curriculum was changed so that nearly two thirds of the work consisted of clinical clerkships.

In 1945, the college purchased a six and one-half acre tract of land that eventually became the site of Downstate Health Sciences University. After approval by a faculty committee and the board of trustees of the Long Island College of Medicine, the board of managers of the Alumni Association, the trustees of the State University of New York, and the State Board of Regents, the State Legislature in 1950 passed a bill legalizing the merger of the Long Island College of Medicine and the State University to form Downstate Health Sciences University.

The "Downstate" era began on April 5, 1950 with a special ceremony at the Waldorf Astoria Hotel, where a merger contract was signed between the Long Island College of Medicine and the newly constituted State University of New York. Several years later, the current campus of the SUNY Health Science Center at Brooklyn was built in East Flatbush. In April, 1953, ground was broken for the current Basic Sciences Building, and President Dwight D. Eisenhower laid the cornerstone in 1954. The complex was expanded in 1966 with the opening of University Hospital of Brooklyn. The School of Graduate Studies, the College of Health Related Profession, and the College of Nursing were also added that year.

The establishment in 1966 of the School of Graduate Studies, the School of Health Related Professions, and the College of Nursing, and the construction of the basic sciences building in 1956, student residence halls in 1965, State University Hospital in 1966, the student center in 1967, and the nurses' residence in 1968, completed the transition of the medical school as it is now known from its early days as the German General Dispensary on Court Street.

Dr. Louis Bauer (1814-1898) has been referred to as " the father of orthopaedic surgery in the United States. " In 1833 he began his study of medicine at the Universities of Greifswald, Breslau, and Berlin. In 1838, he passed the state examinations and qualified as a physician, surgeon, and obstetrician. along with a fellow German immigrant physician Gustav Braeunlich, he founded, in 1856, what was initially called the Brooklyn German General Dispensary. Within a short time, the name of the institution was changed to the Long Island College Hospital (today it is now known as the Downstate Health Sciences University); this was America's first college hospital. Bauer held an appointment as Professor of Anatomy and Surgery at the hospital. In addition, he later was made Health Officer of Brooklyn City and served in that capacity for two years. He also served as the pathologist for the Brooklyn coroner and was a frequent lecturer at the Brooklyn Medical and Surgical Institute.

In 1998, Dr. Robert Furchgott, chairman of Downstate's Department of Pharmacology, was awarded the Nobel Prize in Physiology or Medicine receiving world-wide recognition for his work, hailed as "brilliantly opening a new domain in science," and revolutionizing scientists' understanding of vascular physiology [learn more] .

Recent developments include the addition of a Master in Public Health program in 2002 and a School of Public Health in 2008. We also returned to State University of New York Downstate Health Sciences University as our institutional name, and in 2010 we celebrated the 150th birthday of the College of Medicine. In 2011, University Hospital at Brooklyn expanded to include UHB at Long Island College Hospital.