In appreciation for his commitment, dedication and enduring contributions to SUNY Downstate. 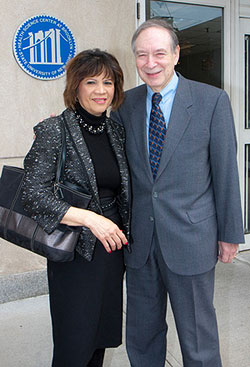 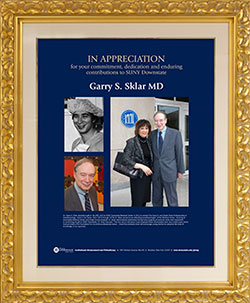 Early in his distinguished career, from 1974 through 1978, Dr. Sklar served as an attending anesthesiologist at the Medical Center. While working at Downstate Health Sciences University and Kings County Hospital, Dr. Sklar administered anesthesia during many surgical procedures rarely seen elsewhere. In confirming his gift to SUNY Downstate, Dr. Sklar has said, "The four and a half years I was employed there [at Downstate] were very fruitful years which truly provided a firm foundation for my entire professional career. I trust this endowed chair will encourage young doctors to advance the body of knowledge of our specialty."

We are truly grateful to Dr. Sklar for his generosity and for the generations of future anesthesiologists who will be educated thanks to the munificence of the Garry S. and Sarah Sklar Professorship in Anesthesiology.

Herman & Olive Pascarella Lectureship on the Treatment of Heart Diseases 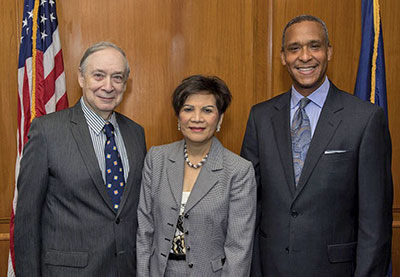 My Enormous Thanks to Dr. Garry and Mrs. Sarah Sklar

It was my honor and pleasure to accept a gift to SUNY Downstate Health Sciences University from Dr. Garry and Mrs. Sarah Sklar to establish a lectureship in memory of Herman and Olive Pascarella. The lectures will focus on the treatment of heart diseases.

Dr. Sklar's generosity and commitment to the Medical Center began with his initial gift of $1,000,000 to endow The Garry S. and Sarah Sklar Professorship in Anesthesiology, which is held by James E. Cottrell, M.D., Chairman and Distinguished Service Professor of the Department of Anesthesiology.

Dr. Sklar received acclaim for a groundbreaking idea following his 1981 publication in Anesthesia and Analgesia, a leading anesthesia journal, that presented evidence related to the power of positive suggestion – specifically, that encouragement to have pleasant dreams could reduce the frequency of nightmares experienced by 12-36% of patients anesthetized with ketamine. Other researchers have conducted more contemporary studies that have led to the recent acknowledgement of Dr. Sklar's hypothesis.

I am exceptionally grateful to the Sklars for their thoughtful gifts and contributions to support excellence at Downstate.