Home/About/Office Of The President/President Riley 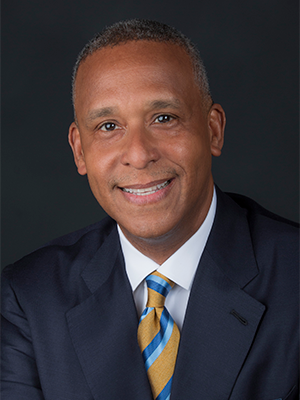 Wayne J. Riley, M.D., MPH, MBA, MACP, was appointed by the Board of Trustees of The State University of New York (SUNY) as the 17th President of SUNY Downstate Health Sciences University in January of 2017. Downstate is one of four academic health centers in the 64 campus SUNY System and the only one in New York City.

Dr. Riley is an academic primary care general internist with more than 25 years of progressively senior executive level management, policy, and leadership experience in academic medicine, patient care, research administration, academic health center administration, healthcare management, health policy, biotechnology, the corporate sector, government service, advocacy, and organized medicine. Before Dr. Riley’s appointment at Downstate, he served as clinical professor of Medicine and adjunct professor of Health Policy at the Vanderbilt University School of Medicine and as an adjunct professor of Management at Vanderbilt’s Owen Graduate School of Management. Before his role at Vanderbilt, from 2007-2013, Dr. Riley served with distinction as the 10th president, chief executive officer, and professor of Medicine at Meharry Medical College.

Dr. Riley earned his Doctor of Medicine degree from the Morehouse School of Medicine, a Bachelor of Arts degree in anthropology with a concentration in medical anthropology from Yale University, and a Master of Public Health degree in health systems management from the Tulane University School of Public Health and Tropical Medicine. He also earned a Master of Business Administration from Rice University’s Jesse H. Jones Graduate School of Business. In addition, Dr. Riley completed residency training in internal medicine at the Baylor College of Medicine, rising from instructor of medicine to vice president and vice dean for Health Affairs and Governmental Relations. At Baylor, he also held the academic rank of associate professor of Internal Medicine.

In June of 2021—alongside Drs. Anthony Fauci and Eric Topol—Dr. Riley was awarded the National Medical Humanism Medal by the Arnold P. Gold Foundation for his impactful leadership during the pandemic and passionate advocacy towards addressing health disparities and anti-racism in medicine and healthcare. In 2019, he received the National Medical Fellowships, Inc. Champion of Health Award for his exemplary career in medicine and the support of minority medical students.

Dr. Riley was elected in 2020 as Chair of the Board of Trustees of the New York Academy of Medicine (NYAM), whose mission is to influence and encourage action towards improving the health of all New Yorkers by addressing health inequity in the areas of healthy aging, disease prevention, and the elimination of health disparities. Dr. Riley is the first black board chair in the organization’s 173-year history.

Also, in 2020, Dr. Riley began a three-year term as a Commissioner of the U.S. Medicare Payment Advisory Commission (MedPAC), a non-partisan federal agency that advises Congress on Medicare payments to physicians and healthcare facilities. He is also President Emeritus, Former Regent, and a Master of the American College of Physicians (ACP)—the nation’s largest medical specialty organization representing internal medicine and its subspecialties. In addition, Dr. Riley is an elected member of the prestigious National Academy of Medicine (NAM) of the National Academy of Sciences, where he previously served as Vice-Chair and later, as Chair of NAM’s Section on the Administration of Health Services, Education, and Research.

Dr. Riley is an experienced corporate director who currently serves on the Boards of HCA Healthcare, Inc. and Compass Pathways, PLC.

A native of New Orleans and now a Brooklyn resident, Dr. Riley is an active community leader. He serves on the Boards of Directors of the Bedford-Stuyvesant Restoration Corporation, the YMCA of Greater New York, Catholic Charities Brooklyn & Queens, and the Arthur Ashe Institute for Urban Health.