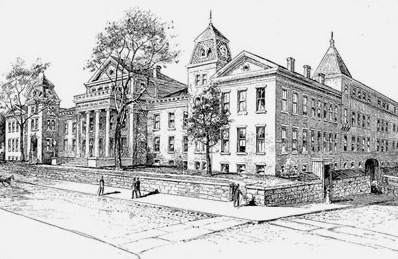 The Long Island College Hospital (established 1858) was a new departure in American medical education because, for the first time, a medical school was combined with a hospital whose wards and clinics were used for teaching. The school was, in part inspired by the great European hospital/medical schools, but in an age of proprietary medical schools, it was necessarily an autonomous, degree-granting institution, nominally under the Regents of the University of the State of New York. The history of this medical college in Brooklyn epitomizes the development of medical education in the United States. Its first lectures were peripatetic with most of the professors teaching in Brooklyn in the spring and at other locations in the summer, or autumn or winter. Thus it shared with other colleges the wisdom and personality of such men as Drs Flint, Hamilton Dalton and Doremus.

In 1856, the city of Brooklyn was the third largest in the United States, with a population of 200,000. In that year, deaths totaled 3,762, or about 19 per 1,000. The first hospital in Brooklyn was the Brooklyn City Hospital, established in 1845. In March 1856, Dr Louis Bauer, a German physician, and his associate Dr Gustav Braeunlich opened a German general dispensary with the main object of serving the German-speaking poor. Soon after, Dr Bauer invited some prominent Brooklyn doctors (Drs Byrne and Ayers) to join the German dispensary group for the purpose of establishing a hospital broader in its scope than was first contemplated; and it was on December 21, 1857 that a medical college with a hospital was first planned for the city of Brooklyn. The name of the institution was changed to the Long Island Hospital and Medical College. There is no record of who first thought of combining a medical school with a hospital in Brooklyn. Dr Bauer and Dr Byrne, the prime movers behind the new institution, had received their medical education in Europe where it was customary for great medical schools to be associated with a hospital as their mutual advantage.

On November 20, 1858 the Joint Board of Council and Faculty was named to organize the College staff and to make inquiries regarding who might occupy the respective chairs. The Joint Board was deeply impressed with the importance of its action in influencing the character and reputation of the College for future years. It was unwilling to destroy the prospective eminence and efficiency of the College by recommending men of inferior merit and thus bring failure and disgrace to the supporters of the project and serious injury to the community it was intended to benefit. First, the Board looked to New York, New Haven and Philadelphia for candidates. By early 1860, a distinguished group gathered to start the teaching for the first students. The gentlemen appointed to the professorships were: Frank H Hamilton, AB, AM, MD, LLD, for the Principles and Practice of Surgery; Austin Flint Sr, MD, LLD, for Practical Medicine and Pathology; John C Dalton Jr, AB, MD, for Physiology and Microscopic Anatomy; R Ogden Doremous, AM, MD, LLD, for Chemistry and Toxicology; James D Trask, MA, MD, for Obstetrics and the Diseases of Women and Children; Joseph C Hutchison, MD, LLD, for Surgical Anatomy and Operative Surgery with Demonstration on the Cadaver; Dewitt C Enos, MD, for General and Descriptive Anatomy; and Edwin N Chapman, MA, MD, for Therapeutics and Materia Medica.

The first class had 57 students and over half of these were in medical school for the first time; the remaining had taken one course at some other medical school and were eligible for graduation that same year. Apart from being the first American medical school to share facilities and governance with a hospital, the Long Island College Hospital was the first teaching institution in the world to use Virchow's method of postmortem examinations by students to allow for correlation of clinical with pathological findings and is believed to be the first medical school in the world to require 18 months of instruction.

In spite of nearly 90 years of successful independent existence with no university connection and maintenance of high educational standards, financial difficulties ultimately led to the merger of the Long Island College of Medicine. It was brought within the orbit of the newly created State University of New York (SUNY) in 1950, leading to the establishment of the present-day State University of New York Downstate Medical Center.