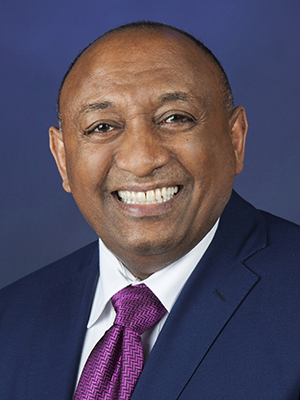 Dr. Demissie is a nationally recognized academic public health leader and researcher in the fields of health disparities and minority health, perinatal health and cancer.

Dr. Demissie currently serves as Dean and Professor of the School of Public Health at SUNY Downstate Medical Center. In the past, he served as Associate Dean for Faculty Affairs, Chair of the Department of Epidemiology at the Rutgers School of Public Health, and Executive Director of the Rutgers Institute of the Elimination of Health Disparities. He also served as the Co-Program Leader for the Population Science Program at the Rutgers Cancer Institute of New Jersey and as a Senior Consultant in Perinatal Health for the Laboratory Center for Disease Control (LCDC) of Canada.

Dr. Demissie received his Doctor of Medicine from Addis Ababa University and his PhD in Epidemiology and Biostatistics from McGill University. He is also trained in Community Medicine at McGill, Health Services Research at the Robert Wood Johnson Medical School and Molecular Prevention at NCI.

Dr. Demissie began his work in public health in the 1980s and has implemented several public health programs and has authored several peer-reviewed publications in highly impactful journals showcasing his nationally funded and recognized work. Much of his research is focused on eliminating caner health disparities in underserved populations in New Jersey. His recent work has focused on identifying the social and molecular causes of breast cancer disparities in African American women, many of whom have some of the worst health outcomes of the disease.

He is an internationally recognized investigator in molecular epidemiology, cancer disparities, cancer prevention and control and population sciences with a diverse funding portfolio, including NIH/NCI, American Cancer Society, Susan G. Komen Foundations and others. He has served on numerous national and international grant review panels including the NIH Obstetric Maternal-Fetal Biology Panel, ACS Cancer Control and Prevention Health Services and Health Policy study section, Standing Panel for Improving Methods for Conducting Patient-Centered Outcomes Research (PCORI) as well as CDC and other national and international panels. He also served as a member of the Canadian National Perinatal Surveillance Program Advisory Committee and the co-Chair of the Data, Research and evaluation Committee and as member of the governance committee of the Regional Health Equity Council for Region II of the U.S. Department of Health and Human Services.

Dr. Demissie is an outstanding professional, teacher, and mentor. He has a strong background in the training of young scientists. He has mentored more than 100 physician and non-physician scientists, including several career development (K01 and K07) awardees. Many of his mentees are now public health leaders in several academic and other institutions. Dr. Demissie was a recipient of several excellence in teaching recognitions, including membership in the Stuart D. Cook, MD Master Educator’s Guild.