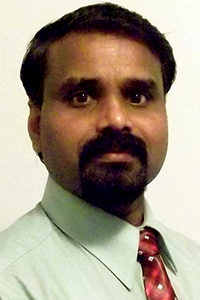 Dr. Kamarajan is an Assistant Professor in the Department of Psychiatry and Behavioral Sciences at SUNY Downstate Health Sciences University (SUNY DHSU), where he is also serving as the chair of psychiatry research committee. He completed his PhD in Clinical Psychology with a specialization in Neuropsychology and Neuroscience in 2001 at the National Institute of Mental Health and Neurosciences (NIMHANS), Bangalore, India, following his M.Phil in Medical and Social Psychology at the Central Institute of Psychiatry, Ranchi, India, in 1996. He has expertise in multiple domains, viz., brain electrophysiology, neuropsychology, neuroimaging, computational programming, signal/image processing. and statistics. He has widely published on the neural oscillatory mechanisms underlying risk and consequences of substance use disorders (SUD). In addition to ERP and ERO measures during cognitive tasks, his current work focuses on specific measures of brain connectivity (e.g., phase-locking index, inter-trial phase coherence and inter-site phase synchrony) and network properties (Granger causality and Graph theory) using data from both sensor space (i.e., scalp electrodes) and source space (e.g., MNE, eLORETA). He has also been working with structural and functional MRI datasets, including functional connectivity across brain regions of various cognitive and emotional networks. He has been involved with several NIH-sponsored projects on alcoholism including the Collaborative Study on the Genetics of Alcoholism (COGA). Dr. Kamarajan is also a co-principal investigator in a recently funded NIH grant on the neurodevelopmental and genomic influences on transitions to alcohol use disorders. He serves as a grant reviewer for the NIH and other scientific organizations. He is also the course director of an elective “Neurophysiology of Alcohol and Drug Addiction” for the final year medical students at SUNY DHSU. He has organized symposia on neurophysiology of AUD at the international scientific conferences. He has been an active reviewer and on the editorial boards of several neuroscience journals, and he is currently editing special issues on topics related to brain mechanisms of addiction and psychopathology. He also serves as an expert examiner to evaluate PhD dissertations on neurophysiology, neuropsychology, psychopathology, and mental health. Dr. Kamarajan has also been involved in teaching, training and mentoring medical and graduate students, postdoctoral researchers, and psychiatry residents. Recently, he has extended his focus on the translational aspects of neuroscience methods, including neurofeedback, cognitive remediation, and brain stimulation methods such as the rTMS. His work is at the interface between basic science and clinical applications.