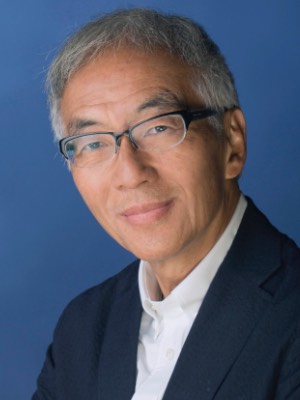 Cellular and Network Properties of the Hippocampus

Our experiments are designed to examine the functional organization of the hippocampus. The properties of synaptic interactions mediated by the neurotransmitters GABA and glutamate are studied in some detail in order to understand how these interactions affect the overall network output.

Studies on the cellular and molecular aspects of neurons have contributed importantly to our understanding of the brain. A full description of the structure and function of the brain requires an examination of how interactions between individual elements bring about the particular behavior of the population of neurons. For example, our studies on the activities in the glutamatergic synapses between the pyramidal cells in the CA3 region give rise to a hypothesis regarding the reverberation of neuronal activities in a network. These reverberating activities can form the substrate for memory or give rise to seizure discharges in epilepsy. Fine tuning of the interaction between the glutamatergic synapses is provided by the inhibitory synaptic transmission mediated by GABA. Our studies show that the GABA receptors are regulated by intracellular calcium and phosphorylation. In addition, a novel excitatory synaptic action of GABA between inhibitory neurons has been uncovered in our experiments, providing insights on the signaling process within the inhibitory network in the hippocampus. Activity-dependent changes in the inhibitory and excitatory synapses are important issues that we are pursuing for a full understanding of the adaptive changes occurring in the brain that underlie all its fundamental functions. 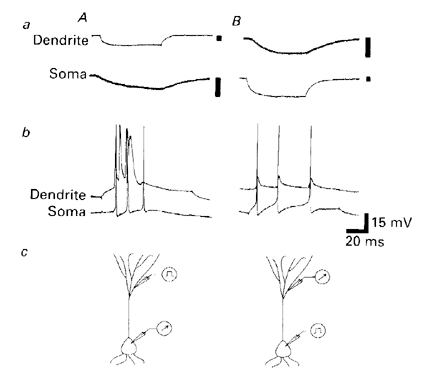 Figure 1. Coupling of dendritie and somatic intracellular recordings. In each of the four paired recordings, the dendritic response is shown above the somatic response. Aa, Hyperpolarizing current pulse injected through the dendritie recording electrode and the passive response recorded at the soma. Ba, hyperpolarization applied at soma is electrotonically conducted to the dendritic recording site. Ab, Depolarization of the apical dendrite elicits a local burst response consisting of fast and slow components. The response of the soma is a burst of fast action potentials. Bb, Depolarization of the soma produces repetitive firing. Attenuated spikes appear at the dendritic location. The drawings at the bottom (Ac and Bc) indicate which element was stimulated (apical dendrite in A; soma in B). Calibrations: vertical bars in top four traces (A and B, dendrite and soma) all 10 mV; time calibration same as bottom four traces: 20 ms. (From Wong and Stewart, 1992)