I am a cardiac electrophysiologist interested in cardiac automaticity (normal and abnormal) and its control. The problems my lab has experimentally analyzed include the mechanisms underlying the pacemaker activity in Purkinje fibers and in the sino-atrial node, overdrive suppression and overdrive excitation in different pacemakers of the heart, the action of the neuromediators norepinephrine and acetylcholine at a cellular level, digitalis arrhythmias both in vitro and in vivo, intracellular sodium activity and arrhythmias, the oscillatory potentials ThVos and Vos and their underlying ionic mechanisms, the tail inward current Iex, the effects of calcium overload on the electrical and mechanical activity of different cardiac tissues, potassium fluxes in the sinus node, myocardial and Purkinje tissues, the study of different drugs as tools to understand cell function as well as their mode of operation as well as other topics.

As an example of the research carried out, the discovery, the function and the mechanisms of cardiac oscillatory potentials ThVos and Vos are briefly presented. The role of diastolic oscillatory potentials in the initiation and maintenance of pacemaker discharge was studied in guinea pig isolated sino-atrial node (SA node) by means of a microelecrode technique. When [K+]O was suitably increased, the maximum diastolic potential decreases and all action potentials (APs) assumed the characteristics of dominant pacemakers (slow responses with U-shaped diastolic depolarization). Subsequently, as the slope and amplitude of diastolic depolarization (DD) decreased, the threshold was missed, unmasking the fused oscillatory potentials Vos and ThVos. As high [K+]O perfusion continued, the oscillatory potentials become separated, Vos following the AP and ThVos appearing later on, when DD enters a less negative voltage range ("oscillatory zone"). ThVos grew in amplitude and attained the threshold, thereby insuring a slow discharge. If [K+]O was further increased, the smaller ThVos missed the threshold and SA node became quiescent. On reducing high [K+]O, ThVos reappeared, increased in size and initiated spontaneous discharge. As they occurred progressively earlier during DD, ThVos eventually fused with Vos: at that stage, DD appeared to continue directly into the upstroke (U-shaped DD) and the oscillations were no longer seen. During recovery in Tyrode solution, size and slope of Vos and of ThVos further increased and caused a faster discharge. When APs assumed a subsidiary configuration, their DD (no longer U-shaped) abruptly terminated into the upstroke. In high [K+]O, increasing [Ca2+]O or applying a fast drive increased the size and slope of Vos and of ThVos, which in turn restored or accelerated discharge. In contrast, low [Ca2+]O abolished Vos and ThVos and caused SA node arrest. Low [Ni2+] increased the rate whereas high [Ni2+] stopped the SA node. Ryanodine eliminated Vos and ThVos and markedly slowed or stopped discharge.

Thus, ThVos and Vos are separate voltage oscillations that play an obligatory role in the initiation and maintenance of SA node discharge, Vos by steepening early DD and ThVos by attaining the threshold in the dominant pacemaker range, either by gradually increasing during late DD at slow discharge rates or by fusing with Vos at fast discharge rates. Vos is dependent on calcium load and ThVos on the activation of the sodium current INa3, as demonstrated in other experiments.

A topic in which substantial contributions were made by my lab is the pacemaker current IKdd in Purkinje fibers which I discovered (Vassalle 1966). That indeed the pacemaker current is a potassium current was confirmed in experiments conducted in single Purkinje cells (Vassalle, Yu, and Cohen,1995). Fig. 1 illustrates the reversal of IKdd at EK. 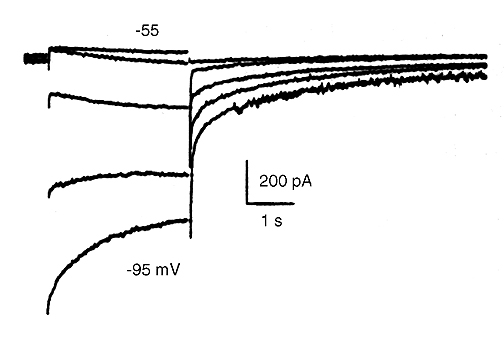 In the latest paper (Vassalle and Bocchi, 2013), published while Emeritus Professor, an electrophysiological analysis of canine single ventricular myocardial (VM) and Purkinje (P) cells was carried out by means of whole cell voltage clamp method.

As a result of the experimental activity carried out over the years, among the various accomplishments, the following cardiac ionic currents were discovered and analyzed: IKdd, INa2, INa3, IVos, Iex and the 4-aminopyridine sensitive current activating during slow ramps Ito3.