Regulatory RNAs are important mediators of gene expression in eukaryotic cells. At the center of our research are brain cytoplasmic RNAs (BC RNAs), a subtype of regulatory RNA that controls neuronal gene expression at the level of translation. BC RNAs are targeted to synapses where they regulate the synthesis of local proteins. The mechanism is important for long-term structural and functional modulations of synaptic connections, and thus for the control of neuronal excitability and plasticity.

The dynamic modulation of synaptic connections is a key underpinning of neuronal functionality and plasticity. In our lab, we work to understand how neurons implement such modulation through local translational control of gene expression in synapto-dendritic domains.

The concept of local translational regulation at the synapse addresses a central conundrum of long-term synaptic plasticity: the problem that long-lasting, activity-dependent alterations of synaptic strength depend on changes of gene expression but on the other hand require that such changes be instituted in an input-responsive, locally restricted manner. With local control of gene expression, a synapse acquires independent decision-making authority, an essential prerequisite for the differential modulation of thousands of input-receptive postsynaptic domains.

Local translation at the synapse is modulated by physiological stimuli such as transsynaptic activity and trophic action. Our work is directed at molecular mechanisms that couple the action of such stimuli to the control of local translation. Such control is essential to restrict synaptic protein synthesis to times of demand. Several types of translational regulators have been identified at postsynaptic sites, prominent among them small BC RNAs and the fragile X mental retardation protein (FMRP) (Kindler et al., 2005; Iacoangeli and Tiedge, 2013).

Neuronal BC RNAs are translational repressors that are highly abundant in dendrites and at the synapse. They are targeted to postsynaptic domains by virtue of spatial codes that are contained in noncanonical RNA motif structures (Muslimov et al., 2006, 2011). (Figure 1). BC1 and BC200 RNAs reversibly repress translation by targeting eukaryotic initiation factors 4A and 4B (Wang et al., 2005; Eom et al., 2014). BC RNA translational control rapidly shifts from a repressive to a permissive state upon receptor activation, a switch that is brought about by dephosphorylation of eIF4B, release of BC RNA from the factor, and initiation of translation (Eom et al., 2014). 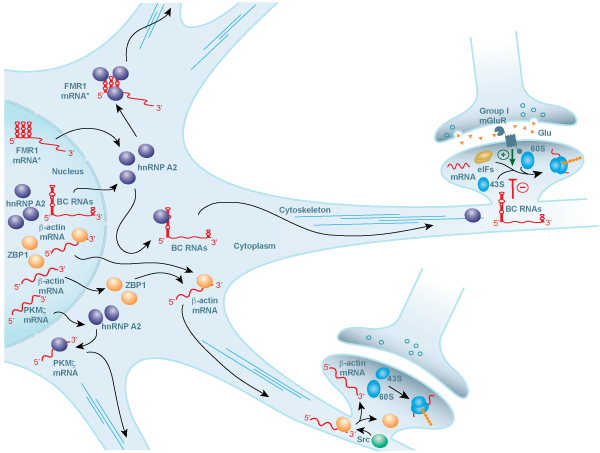 Figure 1. RNA transport and local translation in neurons. BC RNAs control translation of local mRNAs at the synapse. Competition of expanded CGG-repeat FMR1 mRNA for transport factor hnRNP A2 causes impairments in the synapto-dendritic delivery of BC RNAs. (See Iacoangeli and Tiedge, 2013; Muslimov et al., 2018).

Research with BC1 knockout animals has shown that cell-wide lack of BC1 RNA gives rise to neuronal hyperexcitability, epileptogenic susceptibility, and cognitive dysfunction (Zhong et al., 2009; Iacoangeli et al., 2017). Dysregulated neuronal RNA control can thus be a cause of neurological and cognitive impairment. Near-identical phenotypic alterations were observed when synapto-dendritic targeting of BC1 RNA was inhibited as a result of competition for RNA transport factor hnRNP A2 by expanded CGG-repeat FMR1 mRNA in a mouse model of fragile X premutation disorder (Muslimov et al., 2018). Recent work has shown that autoantibodies from a subset of lupus patients displace transport factor hnRNP A2 from BC RNA dendritic targeting elements and as a result inhibit synapto-dendritic delivery (Muslimov et al., 2019). Taken together, the data indicate that BC RNA intraneuronal transport impairments can result in pathogenicity (Figure 2). 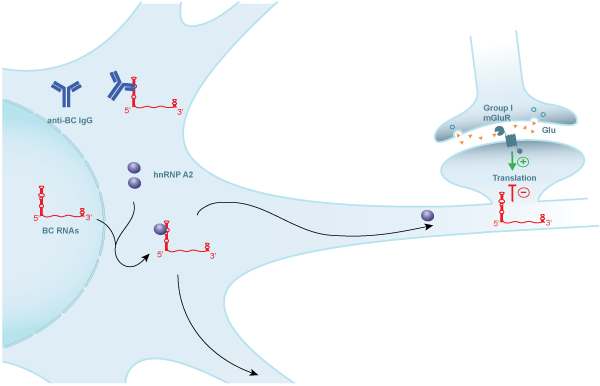 We are conducting an independent research project that is aimed at establishing the biological relevance of BC RNAs in tumor cells, and at developing early cancer diagnostic and prognostic tools. Based on our finding that BC RNAs are detectable at significant levels in oocytes and spermatogonia as well as in various types of malignant tumor cells, we suggest that:

Our research is aimed at establishing the role of BC RNAs in translational control mechanisms in tumor cells, its functional relevance in tumorigenesis and tumor progression, and the clinical utility of dysregulated expression in tumor cells. In particular, we will develop the utility of BC200 expression for tumor diagnosis and prognosis (Iacoangeli et al., 2018). This work is covered by a number of patents.