Our lab studies mechanisms of activity-dependent plasticity of the central nervous system. Plasticity represents a modification of cellular and population activity in response to activation in certain brain areas. The main focus is the study of underlying mechanisms of a model of learning and memory, called long-term potentiation (LTP).

Calcium-dependent changes in the efficacy of ligand-gated receptors. Whole-cell clamp experiments are performed in acutely dissociated pyramidal cells of the hippocampus and pyramidal cells in the CA1 region of the hippocampal slice. Effects of elevation of intracellular calcium on GABAA and AMPA receptor function are measured. GABAA and AMPA receptors are the receptors mediating fast synaptic inhibition and excitation, resp. in the mammalian CNS. Sources of elevation of Ca2+ are the experimental internal perfusion of solutions containing defined Ca2+ levels and calcium transients through voltage-gated calcium channels and NMDA receptor-coupled channels. The experiments also address the biochemical mechanisms of elevation of Ca2+ in the regulation of AMPA and GABAA receptor function. Possible roles of enzymes that are known to be activated by Ca2+ are examined. 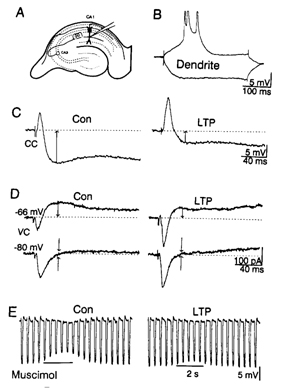