Inhibition sculpts neuronal structure and function during adolescence: implications for mood and learning

α4βδ GABAA receptors increase expression at puberty in the mouse hippocampus where they generate a tonic inhibition. Because these receptors express on the dendritic spine adjacent to excitatory synapses, my lab is interested in the role this developmentally-regulated inhibition plays in cognition and synaptic pruning of dendritic spines during adolescence, which impacts behavioral flexibility in adulthood. This receptor is also the target for neurosteroids which alter mood. Adolescence is a vulnerable period for the development and exacerbation of disorders such as anxiety as well as autism and schizophrenia, which are also interests of the lab.

Neuronal circuits in the hippocampus underlie spatial learning and, as part of the limbic system, also play a role in the development of anxiety. My laboratory studies how the activity of these circuits is sculpted by inhibition generated by GABAA receptors, which can then lead to changes in cognition, mood and pathological states such as epilepsy. Our most recent studies focus on changes generated by inhibition during the period of adolescence, a critical period for certain types of learning and when certain neuropsychiatric disorders, such as anxiety and schizophrenia first develop.

Our primary focus is the α4βδ GABAA receptor, a membrane protein which emerges at the onset of puberty on the dendrites and spines of pyramidal cells in the CA1 hippocampus and other CNS areas. 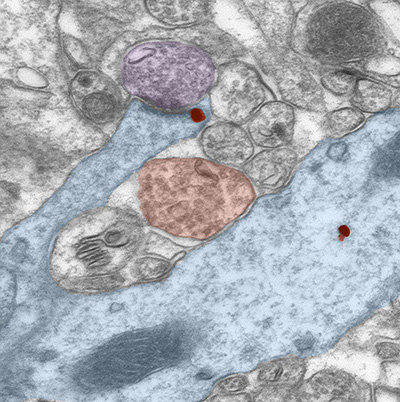 Inhibition and learning during adolescence

We have shown that the presence of this inhibitory receptor adjacent to excitatory synapses reduces the activation of NMDA receptors, which is the initial step in the learning process. At puberty, spatial learning is impaired as is the induction of long-term potentiation (LTP) in the CA1 hippocampus, considered an in vitro model of learning (Shen et al., Science 2010). These findings may help to explain why the onset of puberty has been shown to represent the end of a critical period for learning certain tasks (such as language acquisition in humans). 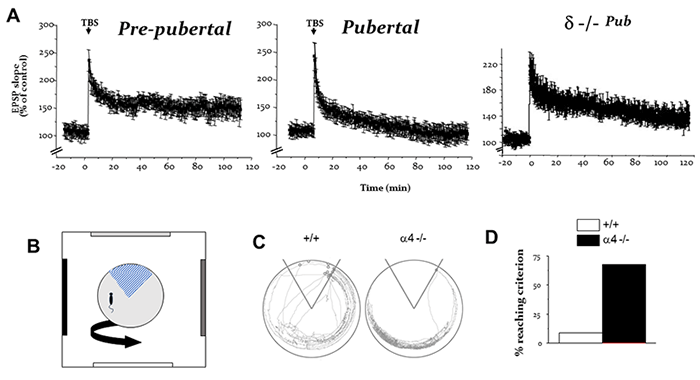 Inhibition and synaptic pruning during adolescence

The presence of the α4βδ GABAA receptor on dendritic spines of CA1 hippocampal pyramidal cells motivated my laboratory to investigate the role of this receptor in eliminating dendritic spines during adolescence. This process, known as "synaptic pruning" is believed to remove unnecessary synapses during adolescence to enable more relevant memories to form in adulthood. Our recent paper (Afroz, Parato et al., eLife 2016) shows that α4βδ GABAA receptors are the initial trigger for this process which leads to decreases in Kalirin-7, a spine protein which stabilized the actin cytoskeleton and is necessary for spine stability. In the α4 knock-out pruning is prevented and reversal learning (a form of cognitive flexibility) is impaired. Abnormal pruning has been reported in neuropsychiatric disorders such as autism and schizophrenia, where genetic abnormalities in α4 and δ expression are also found. Thus, our findings may suggest future therapeutic strategies for these disorders. 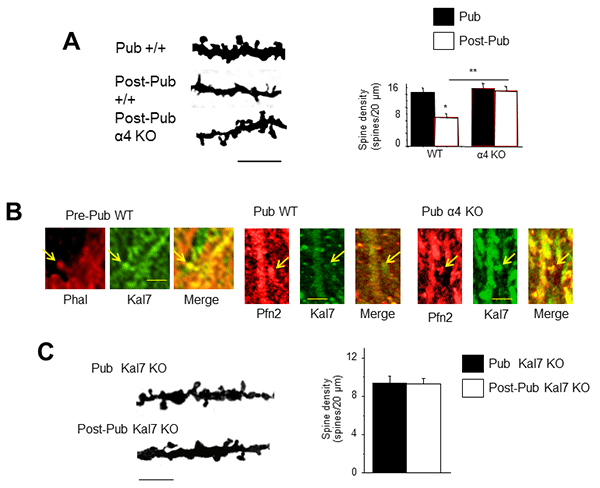 Inhibition and seizure activity during adolescence

The increase in α4βδ GABAA receptors at puberty also reduces the ability of high potassium to generate seizure-like activity in the CA1 hippocampus (Yang at el., Scientific Reports 2016) in studies performed in collaboration with Lisa Merlin. These findings may, at least in part, explain the dramatic 50% remission rate reported for childhood epilepsy during adolescence.

Neurosteroids and anxiety during adolescence

α4βδ GABAA receptors are the most sensitive targets for neurosteroids such as allopregnanolone (THP), a metabolite of progesterone. Before puberty and in the adult, this steroid, which is released in the brain in response to stress, enhances inhibition and reduces anxiety via limbic circuits which include the hippocampus. However, at puberty, when these α4βδ GABAA receptors are expressed in the CA1 hippocampus, allopregnanolone reduces their inhibitory effect, due to the direction of Cl- flux, because allopregnanolone creates inward rectification at the GABAA receptor-associated Cl- channel. This neurosteroid-induced reduction of inhibition increases neuronal excitability within the hippocampal circuit and behaviorally, results in increased anxiety as a result of stress only during the pubertal period (Shen et al., Nature Neuroscience 2007). These findings suggest that stress-induced anxiety is greater during adolescence which may underlie the mood swings and anxiety sometimes associated with this developmental period.