Dr. Furchgott, founding Chair of the Department of Pharmacology, continued his research in the Department as Distinguished Professor Emeritus 1989- 2009. The inauguration of the Robert F. Furchgott Center for Neural and Behavioral Science on April 12, 2007, marked his last visit to his former academic home. Dr. Furchgott passed away on May 19, 2009. His website will be kept on display as a tribute to his achievements in our Department.

The Nature of the Endothelium-Derived Relaxing Factor

Our research includes studies on the mechanisms by which various vasodilators, both endothelium-dependent and independent, and near ultraviolet radiation produce relaxation of vascular smooth muscle. Also, we are investigating whether the endothelium-derived relaxing factor (EDRF) is simply nitric oxide or a mixture of substances.

In 1980, we reported that endothelial cells have an obligatory role in the relaxation of arteries by acetylcholine (ACh) and related muscarinic agonists, and that the relaxation results from the stimulation by the muscarinic agonist of the release from the endothelial calls of a very labile diffusible factor which acts on the adjacent smooth muscle cells to cause their relaxation. This factor was called the endothelium-derived relaxing factor (EDRF). Within a short time, a number of other endothelium-dependent vasodilators were found. EDRF released from endothelial cells was shown to activate soluble guanylyl cyclase in the smooth muscle cells, giving rise to an increase in cyclic guanosine monophosphate (cGMP), which appeared to have a causal role in producing the relaxation. Although some very potent scavengers of EDRF, such as hemoglobin (Hb) and the superoxide anion (O2-) were discovered, the chemical nature of EDRF eluded identification until 1986, when it was proposed independently by us and by one other investigator at an international conference that EDRF is nitric oxide (NO). Within two years after that, other laboratories had demonstrated that the NO synthesized in endothelial cells is a product of the action of a calcium/calmodulin dependent oxygenase, nitric oxide synthase (NOS), which oxidizes a guanidinium nitrogen of L-arginine to yield NO and citrulline (see Fig. 1). 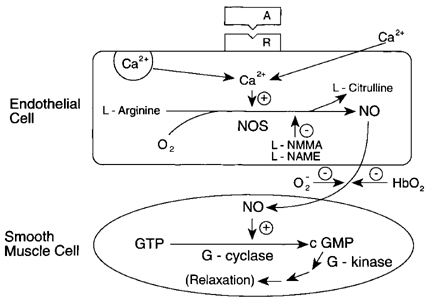 Figure 1. Current scheme for endothelium-dependent relaxation. Agent A, acting on receptor (R) of endothelial cell activates Ca2+ influx, with the increase in intracellular Ca2+ activating through calmodulin the endothelial nitric oxide synthase (NOS), an oxygenase using L-arginine and NADPH as co-substrates, with FAD, FMN, and tetrahydrobiopterin as cofactors. NO diffuses to the smooth muscle cells where it activates guanylyl cyclase, with a resulting increase in cGMP, which initiates processes leading to relaxation. L-NMMA and L-NAME are arginine derivatives which inhibit NOS, and O2- and HbO2 are potent scavengers of NO.

Although much evidence has accumulated that EDRF released from endothelial cells in organ chamber experiments and perfusion-bioassay experiments is primarily NO, some results obtained by us and others indicated that EDRF initially released from endothelial cells after exposure to an agent like ACh or the calcium ionophore A23187 may not be simply NO but rather some complex or adduct of NO (termed RNO) which is more resistant than NO to scavenging by the superoxide anion (see fig. 2). 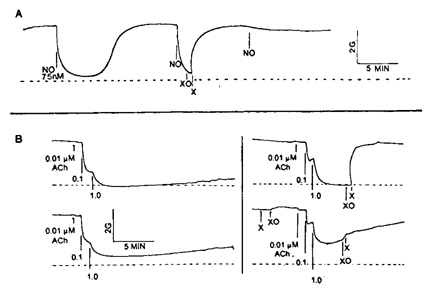 Figure 2. Effects of superoxide (O2-) generated by xanthine oxidase (XO) and xanthine (X) added to organ chambers on relaxation of rings of rabbit aorta produced by nitric oxide (tracing A) and by acetylcholine (tracing B). Dashed lines indicate basal tone before contraction with phenylephrine. The generated superoxide blocks NO induced relaxation whether X+XO is added before or after the NO. X+XO also blocks ACh-induced endothelium-dependent relaxation rapidly when added after the ACh, but not when added before the ACh.

Some of our present research is directed at determining whether EDRF released from endothelial cells of rabbit aorta under certain experimental conditions contains RNO adducts as well as NO itself. In this work, comparisons are being made of the biological and chemical properties of EDRF, NO, and various nitrosothiols (like S-nitroso-L-cysteine) and nitroso-ferrous-thiolates.

The product of the extremely fast reaction between NO and superoxide (O2-) is peroxynitrite (ONOO-), a short-lived (at physiological pH) but highly reactive species. Under certain pathological conditions in which there is induction of NOS in many tissues, the peroxynitrite formed may produce nitration of tyrosine moieties in proteins. In studying the effects of peroxynitrite on rabbit aorta, we found that its potency as a relaxing agent is enhanced when glucose is present in the bathing Krebs-bicarbonate physiological salt solution. This led to the discovery that peroxynitrite during its rapid decay at physiological pH (about 1 sec.), nitrosates glucose to produce a vasorelaxant. In addition, the vasorelaxant can sensitize endothelium-free arterial rings so that after washout, the rings respond to added thiols (cysteine or glutathione) with a strong but transient relaxation. To explain such results, we developed a hypothesis in which peroxynitrite nitrosates glucose, the nitrosyl glucose transnitrosates ecto-thiols on the cell membranes of the arterial rings, and finally the thiol added to the bathing solution is transnitrosated by the ecto-nitrosothiol to give an effective relaxing concentration of the resulting nitrosothiol in the vicinity of the tissue for a limited time. Various approaches (bioassays, spectrophotometric analyses, NO-sensing electrode analyses, etc.) are being used to test this hypothesis and evaluate its physiological significance.