Our lab has studied the effects of addictive drugs on the functional ontogeny of the CNS, during both prenatal and adolescent development, with a special emphasis on male-female differences. These highly translational studies have contributed greatly to understanding brain-behavior relationships and how drug exposure during development alters the neural circuit underpinnings of behavior. Recently, our focus has been on marijuana. Following my Fulbright experience (2015-2016 Distinguished Visiting Research Chair in Brain Science, Child and Family Health and Wellness), I have been lecturing to lay and professional audiences throughout the US and Canada on the effects of marijuana on brain development.

Video: Marijuana and the Development of the Brain

Adolescents who use marijuana are more likely to exhibit anxiety, depression, and other mood disorders, including psychotic-like symptoms. To examine the effects of early life experience on adolescent Δ-9-tetrahydrocannabinol (THC) exposure, we exposed adolescent male and female rats, either shipped from a supplier or born in our vivarium, to once daily injections of THC. Results suggest that males are more sensitive to the anxiolytic and antidepressant effects of THC than females and shipping increased THC responses primarily in males. THC increased cannabinoid receptor 1 (CB1R) mRNA expression and decreased CP55,940 stimulated [35S]GTPγS binding in the central amygdala only of females. Therefore, early stress enhances THC responses and THC alters CB1R expression and function in females only. In summary, THC and stress interact with the developing endocannabinoid system in a sex specific manner during the peri-pubertal period.

Figure 1. Effects of adolescent THC exposure on anxiety and depressive-like behavior in stressed and non-stressed rats. Shipping stress at P14 increased the response to chronic THC (3mg/kg) if the THC is administered during the prepubescent period.

Gestational exposure to cocaine now affects several million people including adolescents and young adults and may alter vulnerability to take and/or abuse illicit drugs. This study sought to answer the question "Does prenatal exposure to cocaine, in a dose-response fashion, alter the rewarding effects of cocaine using a conditioned place preference (CPP) procedure during adolescence in the rat, and are there sex differences and what is the effect of environment?"

Rats were dosed daily with cocaine at two doses prior to mating and throughout gestation. On postnatal day (PND) 23, pups were placed into isolation cages or enriched cages. On PND43-47, CPP was determined across a range of cocaine doses. Results show that prenatal cocaine increased sensitivity to the rewarding effects of cocaine in adolescent males, and being raised in an enriched environment further enhanced this effect. Rats exposed to the high dose resembled the controls.

These data support the unique sensitivity of males to the effects of gestational cocaine, that moderate prenatal cocaine doses produce greater effects on developing reward circuits than high doses and that housing condition interacts with prenatal treatment and sex such that enrichment increases cocaine CPP mostly in adolescent males prenatally exposed to moderate cocaine doses. 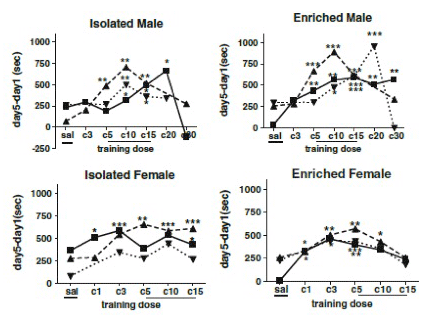 60% of tobacco smokers start before age 14. Females are typically more sensitive to nicotine than males yet few studies examine the effects of nicotine on reward systems in preadolescent female subjects. This study utilized single trial conditioned place preference (CPP) test in juvenile rats of both sexes and found that 0.05 mg/kg nicotine induced CPP in females while both sexes showed CPP following the higher dose. Nicotine also had substantial lasting behavioral effects at doses substantially lower than seen at older ages reported by others. These effects, which could potentially result from cigarette or e-cigarette smoking by 11-12 year old children, focus attention on the vulnerability of this age group to nicotine and the heightened sensitivity of females.