Research Summary: Eukaryotic translation mechanisms and their exploitation by viruses

Research in our laboratory is concerned with how the cellular apparatus for protein synthesis in higher eukaryotes is usurped by viruses. Translation of most eukaryotic mRNAs is end-dependent, and proceeds by a mechanism in which a 43S complex comprising eIF1, eIF1A, eIF3, an [eIF2-initiator tRNA-GTP] complex and a 40S ribosomal subunit binds to the capped 5'-end of a mRNA and then scans the 5' nontranslated region to locate the initiation codon, where it forms a 48S complex. Ribosomal attachment is mediated by the cap-binding complex eIF4F, which consist of eIF4E, eIF4A and eIF4G subunits. eIF5 and eIF5B promote joining of a 60S ribosomal subunit to the 48S complex to form an 80S complex that is competent to begin protein synthesis.

A few mRNAs contain an internal ribosomal entry site (IRES) that mediates end-independent ribosomal attachment to an internal position in the mRNA. IRESs differ from one another significantly in length, sequence and structure. We are using biochemical reconstitution to define the factor requirements for initiation on members of different IRES groups, and to date have identified three very different mechanisms of internal ribosomal entry.

Assembly of 48S complexes on the ~450nt.-long Encephalomyocarditis virus (EMCV) IRES required only eIF2, eIF3, and the eIF4A and eIF4G subunits of eIF4F, and therefore has simpler factor requirements than cap-mediated initiation. The central third of eIF4G binds specifically to the IRES upstream of the initiation codon and eIF4A enhances this interaction. Together, these factors induce conformational changes in the region of the IRES flanking the initiation codon to which the ribosome binds. These results are the basis for a widely accepted model for IRES function: eIF4G plays a role in promoting ribosomal attachment to a specific location on EMCV-like IRESs that is analogous to that of eIF4E in cap-mediated initiation. The functional interaction of eIF4G/4A with the IRES depends on the integrity of the binding site, and we have identified two IRES trans-acting factors (ITAFs) that synergistically modulate the structure of EMCV-like IRESs to enhance binding of eIF4G/eIF4A. These factors are the pyrimidine-tract binding protein and ITAF45, a cell cycle-regulated protein. Tissue-specific expression of ITAFs likely constitutes an important determinant of viral pathogenesis.

The ~350nt.-long IRESs of hepatitis C virus (HCV) and classical swine fever virus utilize a novel and remarkably simple initiation mechanism. Ribosomal 43S complexes comprising only a 40S subunit, eIF3 and the [eIF2/tRNA/GTP] complex bind directly to each IRES to form a 48S complex at the initiation codon. We have identified specific interactions between individual eIF3 and 40S subunit components of the 43S complex and these IRESs, and are now characterizing them in detail. These interactions are required for initiation and are thus potential targets for chemotherapeutic agents.

The dicistronic genome of cricket paralysis virus (CrPV) and related insect viruses contains a ~200nt.-long IRES between cistrons that promotes initiation of capsid proteins at non-initiation codons. We found that this IRES also binds directly to 40S subunits, but differs from the HCV IRES in that it can assemble functional 80S ribosomes in the total absence of initiation factors and without a coding triplet or initiator tRNA in the ribosomal P site. Instead, the first decoded triplet and its cognate amino-acylated elongator tRNA are moved from the ribosomal A site to the P site by a pseudo-translocation event that occurs without peptide bond formation but that requires both elongation factors EF1A and EF2. Although their precise mode of binding to 40S subunits differ, HCV and CrPV IRESs both contain determinants that place their respective mRNA coding regions precisely in the decoding region of the ribosome. 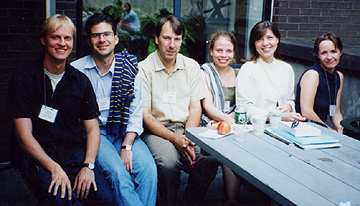