We study the regulation of central serotonergic (5-HT) neurotransmission and neuropharmacology using electrophysiological patch clamp techniques to record isolated ion currents from acutely isolated, adult rat brain, serotonergic dorsal raphe (dr) neurons. We are particularly interested in second messenger effects and the mechanism of excitability changes induced by neurotransmitters and drugs. In collaboration with Henry Tuckwell at the University of Adelaide, Australia our recorded parameters have been used to develop a computational model of the pacemaker firing of dr neurons. Recently in collaboration with Dr. Keith Williams we have also been studying the modulation of TRPC4 and 5 ion channels by ATP.

My lab is interested in the modulation of voltage-dependent and ligand gated conductances in acutely isolated, 5-HT containing, central neurons. The use of predominantly isolated adult brain cells (and lately cultured neuronal cell lines), that can be studied at the whole cell or single channel patch-clamp level, has allowed us to answer several questions not previously investigated in adult central neurons.

We are working on the modulation of calcium current in dorsal raphe serotonergic neurons of the rat brain and have discovered a profound inhibitory modulation of this voltage-activated current by the neurotransmitter serotonin. My recent work has involved characterization of the receptor (5-HT1A), the mechanism (G-protein type), possible second messengers and the calcium channel type that is affected (N, and "N-" channels).

In our studies, we provided evidence to support the hypothesis that G-protein alpha and -beta/gamma subunits, in their inactive GDP-bound form, are subject to covalent modification by PKC; thus phosphorylation by PKC may occur in a conformation dependent manner. This effect suggests that the G-protein may be a "programmable messenger" that after modification by PKC would interact weakly with Ca2+ channels but normally with K+ channels. We have gathered evidence recently suggesting that the action of PMA in decreasing the effectiveness of Ca current modulation, appears to be exerted on the G-protein in raphe cells rather than on the Ca channel.

Figure 1. 5-HT dramatically increased K+ channel activity in an outside-out patch, when it was added to the bath. (A) Single channel I-Vs from the o/o patch to which 5-HT was added. Five conductance levels were observed using both slope and chord conductance. (B) Unitary activity is plotted on a compressed time base. (C) Selected periods of the recorded activity are plotted on an expanded time base, obtained at the locations indicated by the lines.

We have also recently discovered that transient receptor potential ion channels (TRPC5 channels) are profoundly inhibited by intracellular ATP suggesting that they may normally be regulated by the metabolic state of the cell. There are multiple mechanisms of activation of TRPC channels, and we hypothesize that intracellular ATP may be a general "gain control" affecting all forms of activation or that it may function as a selective "filter" that modulates only some forms of activation. Our strategy includes patch clamp recording that addresses the technical challenges inherent in studying modulation of channels by intracellular regulatory factors; molecular studies and single channel recording to determine the site and mechanism of action of ATP; and studies of the role of TRPC channels in cell death. These studies will help to resolve problems in a field where there are conflicting reports about the mechanisms of activation and regulation of TRPC channels, and will have important implications for understanding the regulation of these channels in physiological and pathological processes. 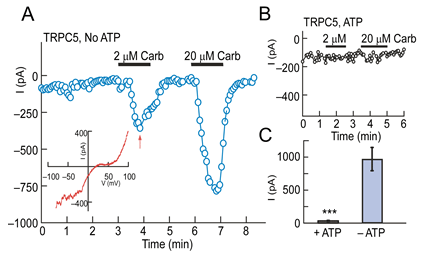 Figure 2. Intracellular ATP inhibits TRPC5 currents. (A, B) Whole-cell recordings of HEK-293 cells expressing TRPC5 and the M1 receptor; Vh = -60 mV. (A) The patch pipette did not contain ATP. (B) The patch pipette contained 4 mM ATP. Inset in A: I-V relationship measured at the time shown by the arrow. (C) TRPC5 currents activated by 20 µM carbachol measured in the presence or absence of ATP (means ± sem, n = 9; *** p<0.001).