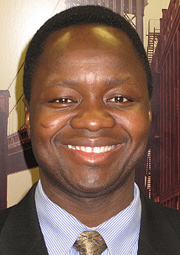 Dr. Moro Salifu is Chief of the Division of Nephrology and Director of the Kidney Transplant Program at SUNY Downstate. Dr. Salifu came to SUNY Downstate after medical school in Turkey to pursue residency training in internal medicine. After internship, Dr. Salifu rapidly excelled as resident in medicine, subsequently meriting him fellowships in kidney diseases, kidney transplantation and interventional nephrology, for which he graduated as a stellar scholar in all three subspecialties. While in residency and Fellowship training, Dr. Salifu won annual awards in the basic science category in the Department of Medicine for six consecutive years as well as four consecutive awards from the American College of Physicians. After fellowship training, Dr. Salifu was retained by SUNY Downstate as Assistant Professor in 2001. He rapidly rose through the ranks to Associate Professor and Professor within 7 years, a milestone that is credited to his outstanding original research contributions, clinical acumen and medical education. In about the same time, Dr. Salifu, earned two masters degrees in public health and healthcare business administration respectively. He has directed the nephrology fellowship training program since 2001 and in 2008 assumed the roles of Chief of Nephrology and Director of the Transplant Program, roles that were crucial to the restructuring of the kidney dialysis and transplant programs at Downstate. He is a recipient of many grants and has published extensively. He is a member and journal reviewer for many nephrology and transplant societies and has served in many local and national professional committees. He is also a fellow of the American College of Physicians. Dr. Salifu's research interest are CKD disease progression, vascular biology and kidney transplant outcomes.