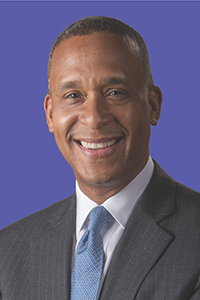 Wayne J. Riley, M.D., MPH, MBA, MACP, was appointed President of The State University of New York (SUNY) Board of Trustees as the 17th president of SUNY Downstate Medical Center in January of 2017. Downstate is the only academic medical center in Brooklyn and one of four academic health centers in SUNY's 64-campus system.

Dr. Riley earned his Doctor of Medicine degree from the Morehouse School of Medicine, a Bachelor of Arts degree in anthropology with a concentration in Medical Anthropology from Yale University, and a Master of Public Health degree in health systems management from the Tulane University School of Public Health and Tropical Medicine. He also earned a Master's in Business Administration from Rice University's Jesse H. Jones Graduate School of Business. Dr. Riley completed his residency training in internal medicine at Baylor College of Medicine in Houston, Texas where he rose from instructor of medicine to vice president and vice dean for Health Affairs and Governmental Relations. He also held an associate professorship of Internal Medicine.

Dr. Riley is immediate past president and president emeritus of the American College of Physicians (ACP). He has served as chair of the prestigious National Academy of Medicine of the National Academy of Sciences as an elected member of the Administration of Health Services, Education, and Research, and is recognized as a master of ACP. Dr. Riley also served as a member and secretary treasurer of the Society of Medical Administrators, a member of the American Clinical and Climatological Association, and as a member of the Sullivan Alliance to Diversify the Health Professions.

A Brooklyn resident, Dr. Riley currently serves on the boards of the Bedford Stuyvesant Restoration Corporation, the YMCA of Greater New York, and the Arnold P. Gold Foundation.